Request Demo
Why do we need a systemic strategy for Reskilling employees? - 28 Sep 2020

Why do we need a systemic strategy for Reskilling employees?

I have conducted discussions with several HR leaders across the UK, Europe, Australia, and the US.  The week started with an intriguing question from a Chief Learning Officer.  “Why do we need a systemic strategy for Reskilling employees- can we not make sure all courses available and let learning be a self-regulated exercise”?.  As we have been advising a very planned reskilling strategy, rather than giving an impulsive response, we took some time to respond to this.  Our first part of the research took us to work done by professor Eva Tardos – a Cornell university mathematician who has done amazing work in network flow models.  Eva Trados’ famous work is around traffic theory.  Professor Tardos studied extremely congested traffic networks (like in LA in the US or Bengaluru in India), the difference between fully regulated systems (giving very precise information on when we should move) vs. self-regulated systems (honk and move at whim😊).  Dr. Tardos proved that Self Routing or Selfish routing has a price of anarchy that is a mere 4/3, which is free for all is only 33% worse than top-down coordination.  This work is very widely acknowledged and adopted in many internet data transfer protocols.

Does this mean a lack of strategy is better?  While this is a fascinating research, the journey in this scenario is short-lived.  The journey often lasts less than an hour, even in extremely congested systems (different in Bengaluru where you can be in traffic for hours).  But the point is this a finite journey.  Learning does not work like that.  Learning is very continuous, where frameworks have to be defined.  Also, people will take a lot of their information from their peers.  If a colleague finds learning Python is tough, quite likely, the person receiving that information will also find it complicated.  This is called Information Cascade – a concept popularized by academician Sushil Bikchandani.  Also, people are outcome-driven, and as a result, they need to understand the outcomes of taking a particular path in learning.  (sort of a Contextualized Google for Learning).  Your learning strategy for GenZ will also be different when compared to others.  So having a reskilling strategy is not only important but also essential.  In the next 12 to 15 months, Draup theorizes that there will be active questions from Analysts in quarterly investor conference calls across all public companies.  This is going to become supremely important.  The biggest plan any learning officer can work on would be imagining the new roles that can be created.  The roles such as Digital Marketing Analysts, Product Managers, Data Extraction and Translation Roles, Localization Engineers, Hyper Automation Engineers are all roles that did not exist 3 to 5 years ago.  But each enterprise has to imagine this.  And not in the context of fancy titles like a– Chief Thinker.  We have to arrive at roles that are scalable with real new age responsibilities that need to be created as Automation takes over.  I think HR should own studying the impacts of Algorithmic bias across all products used by a company (including products that your customer uses).  This may be for a different topic for a separate email.  Another important responsibility is to define the learning DNA of employees.  Educator and Harvard researcher Tony Wagner has developed an effective set of principles around this.  Here is a snapshot of the same. 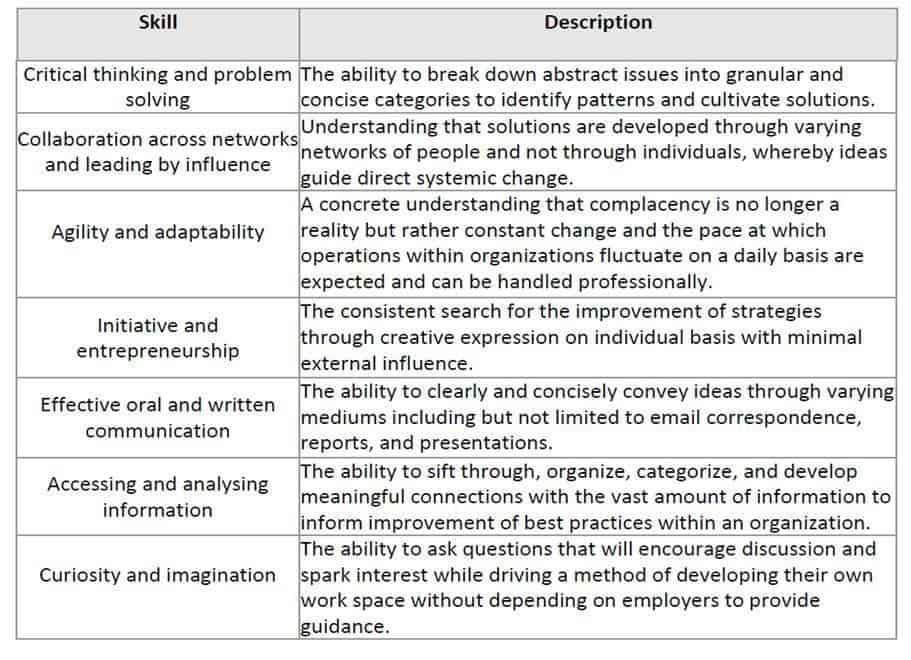 Is Tech Talent moving away from bigger cities – An investigation

One other question we receive in several meetings is – is tech talent moving away from bigger cities.  Tech talent moving away from the bigger cities is not a new topic.  This has been around for at least 20 years in different formats.  This time, it is very different as we are in the middle of a very large pandemic – humanity has ever known (behaviorally, all pandemics feel that way).  To study this, let us start with Steve Case- Creator of AOL.  Steve Case has done a lot of work in this area in spreading out the tech talent development outside the Boston area, Silicon Valley area hotspots.  Steve Case investment fund has raised a billion-dollar fund to support the cause.  Steve Case argument was very simple.  The Midwest economy is worth about 4 Trillion dollars (this is bigger than Germany for reference).  So at a minimum, we should be comparable to Germany from a tech talent perspective.  Steve Case Fund has seen some success in cities like Indianapolis, Detroit, Chicago, Minneapolis, Charlotte, Pittsburgh, and similar places.  One company called Factoryfix is doing very good work to find great manufacturing talent in the Midwest.  All this is great news.  But the important question- Will there be a Boomerang of talent from tech hubs to newer, smaller cities?  Zillow initially reported seeing an uptick in people searching for single-family homes in smaller towns.  (concrete stats not available to us).  But in the recent executive summary, the company downplayed this trend.  We think that areas like Digital Marketing, Logistics, RPA, Hyper Automation can thrive really well in Midwest US cities not because people from Silicon Valley or Boston would relocate and do it, but because the existing talent understands these markets well.  The cities lack learning infrastructure, but that is rapidly changing with the advent of digital.  As a result, we are very excited about this possibility.

Similar trends are seen in countries like India, where cities like Pune and super micro hubs like Vadodara and Coimbatore gain momentum.  Similar trends in UK like movement towards Birmingham, Bristol, Manchester, Belfast are a possibility.  So is movement away from Shanghai to places like Suzhou.  But my initial study based on limited data looking at the longitudinal study of American Youth is a bit worrisome.  When a person moves from a big city to a smaller city, the odds of them going back to a bigger city dramatically increases post 18 months of the move.  With many companies saying they will adjust compensation to local standards, people who migrate to smaller towns may not stay there long post COVID (just a hypothesis for you to consider- more work needs to be done)