We bring you a very interesting summary of discussions and insights. We have started with a discussion and studies around a comment from a technology HR executive. While discussing about location choices, we stumbled upon a thought around talent migrating from smaller cities. The HR executive relayed her thoughts that migration from big cities to smaller cities may be a boon for companies as the cost may not escalate, and the war on talent in concentrated cities may ease a bit. This thought sort of haunted my mind all week. So we started our research on whether this hypothesis is true. We are still researching this, but here are some interesting things. An economy consists of both big cities and small cities. Human Capital/Skills grow that can be procured by firms. This is a symbiotic relationship that has been around for centuries.

Workers provide skills, and firms turn this into revenue. Over time what happened in places like Silicon Valley, Boston, London, the concentration of the skills got super dense, and as a result, these locations got expensive.  For a while, all companies enjoyed this density as it promotes innovation. A University of Waterloo study on Urban Innovation Districts by Ingi Kim states that this compactness is favored by adults in the age group 25 to 34, and within a city, Urban Innovation Districts have emerged (so zones within a big city are the true Innovation Zones). The world was moving in this direction, and suddenly COVID happened. With companies like Facebook embracing full remote work (many companies have signed up in this model), now we are starting to believe that this is a better model. But what does a big city truly gives?

We have to look at the research done by Ioana Marinescu at the University of Pennsylvania for this. Marinescu theorizes that the estimate of the elasticity of the number of applications per job vacancy in big cities is equal to 0.52. What does this mean?  This means that if you have ten jobs open in a big city, you almost get enough applications and resumes for at least 50% of those jobs (5 positions) on its own (through career websites, people hunting and applying for jobs). Now, this number is not to be taken as is. I am sure the pain point perceived in select hyper-competitive jobs is a lot more.  But on the average across aggregate of jobs, this is true.  This elasticity is expected to be a lot lower in smaller cities. As a result, in this new model, recruitment may not get easier; it may get tougher. You do not need fewer recruiters, but you need more. This is one angle that was fascinating to us

Let us look at Skills Development. In a large city, you interact with multiple people in peer companies, and your knowledge is influenced (technology, processes, challenges – basically people talk).  In as much as companies do not want their workforce to talk outside, productive conversations on challenges and technical complexities help the workforce. While the workforce gets better on the job, these interactions also help tremendously.  In the migration to distributed cities, this benefit is lost.  As a result, we need very expanded L&D programs. More importantly, the workforce needs to believe that they can learn new digital skills.  Those in L&D for a while may know this research.  Psychologist Albert Bandura proved that learning is a result of conditioning and self-belief that one can learn.  This is the famous Self Efficacy theory.  (Bandura conducted the famous Bobo doll experiments to show that Kids can be aggressive and non-aggressive as a result of what they are exposed to and what they believe they can and cannot do). This theory has been around a while.  But now we have to look at this theory. For way too long, Digital skills have been kept for select few within an enterprise.  Now we have an absolute need to break this

Finally, another quite useful data set are the Longitudinal studies and data around the same. The National Longitudinal Surveys (NLS) are a set of surveys designed to gather information at multiple points in time on the labor market activities and other significant life events of several groups of men and women. NLS data have served as an important tool for economists, sociologists, and other researchers for more than 50 years.  This is a treasure of data, and we are only scratching the tip of the iceberg here.  But let us look at this. (it is a US labor data, but we are using this for discussion as this is an hypothesis and valid for global scenarios). Young adults have shown that they have reported about eight jobs till they reach 32. (now this survey captures all smaller jobs also but even discounting all that it tells us a story).  This shows that even if your talent moves to say from San Francisco to Wichita-Kansas or from London to say Manchester-UK, the odds of them coming back to bigger cities are quite high!!. We are building a model to quantify this precisely (very initial analysis shows that the odds of someone moving from a smaller city to a larger city is three times higher than the other direction).  For those who want to build this model yourself, this data is available on NLS websites. (you do not need a consultant for this ) 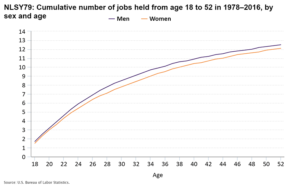 So that one question sent us on a chase for data and we continue to get data and models on this. All this means, we need an intelligent strategy when we move from concentrated locations and distributed locations (across recruitment, L&D and talent management)

Another question in the minds of HR leaders is how to enable the culture of innovation. This once again is an age old question but we are doing some detailed analysis on this as well.  We will present our findings on the same.