We have started with a question from the VP of Talent Acquisition. “The new age tools are demanding different skill sets from Recruiters, and many of them report back using AI platforms difficult to navigate.  How do we address this ?”.  This is a very serious question that we hear from many leaders.  Many AI tools are doing a complex set of tasks, and as a result, they are computationally intense. As a result, this does involve a longer learning curve.  So there has to be a conscious effort not to expect all the tools to be as simple as a Facebook.  That being said, this is an ongoing challenge for all HR products.  When you automate so many aspects, the complexity improves.  But this challenge is not necessarily a bad thing.  AI tools still are saving a lot of effort and time, and they can improve.  Even for the people involved in handling computationally intensive tasks is a good training ground.  The famous London Taxicab experiment showed just this.  Professor Eleanor Maguire wondered whether London taxi drivers also had larger-than-average hippocampi. (A memory zone in the brain).  To earn their licenses, cab drivers in training spend three to four years driving around the city on mopeds, memorizing a labyrinth of 25,000 streets within a 10-kilometer radius of Charing Cross train station, as well as thousands of tourist attractions and hot spots. “The Knowledge,” as it is called, is unique to London taxi licensing and involves a series of grueling exams that only about 50 percent of hopefuls pass. In her studies, Maguire discovered that London taxi drivers had more gray matter in their posterior hippocampi than people who were similar in age, education, and intelligence, but did not drive taxis. In other words, taxi drivers had plumper memory centers than their peers.  When compared to Bus drivers, Taxi drivers had more developed Hippocampi.  This is a remarkable study to justify we need to challenge ourselves daily

Walmart made the successful drone distribution of COVID test kits.  If you need to get a Covid-19 test, but don’t want to go near people, Walmart’s got you covered. At least if you live near its North Las Vegas store. Now, this is a remarkable integration.  The last one year has seen several Drone initiatives.  On October 19, 2019, a hook made of yellow plastic gently lowered a cardboard parcel onto a western Virginia lawn. At the other end of the tether, some 23 feet overhead buzzed drone A1229. When the package touched down, the yellow hook released and ascended back into the sky, sending A1229 speeded off at more than 60 miles per hour, completing the first-ever commercial drone delivery to a home in the United States.  Inside the package was a purple winter vest ordered online by Susie Sensmeier. At the time, the novel transit of the 81-year-old retiree’s new vest seemed more like a milestone in modern convenience. But since that first delivery, the global pandemic has transformed deliveries by drone from a high-tech amenity into something that provides Sensmeier and her husband Paul with added safety.

Why is this important for HR?  This signals that HR will also now have to be proactive about the role people have to play as Collaborative robots come into workforce.  We are introducing a feature called Robots as employees in our platform to give special insights on this activity of HR.  Let us look at Martin’s story – The Restocking associate of Coke, Inc (Martin is an imaginary name).  Every week Martin, covers 100s of businesses in his geographical boundaries to go to each store and assess inventory levels.  Martin had great attention to detail.  Based on his audit, Martin would then estimate when and how to restock to the Coke distribution center.  Martin customers always felt that he is super focused but lacks a bit on people side (Martin simply did not have the time).  Then something dramatic happened.  The Coca Cola company launched Einstein – an image recognition AI. (in early 2018 post tests).  Customers would send a series of images through their coolers’ smartphones, and Einstein would analyze the inventory levels.  Einstein is trained to recognize, identify, and count the varieties and quantities of Coca-Cola bottles stored in one of its cooler display cabinets, simply by analyzing a photo taken with an iPad or iPhone. There’s no longer any need for a Coca-Cola representative to count the contents manually.  Now suddenly, the computationally intensive task for Martin is resolved.  But the challenge shifted to the people side. How can Martin engage with business and see what else can be done?  Martin engaged in conversations with the Business owners.  Very soon, Martin understood that customer positioning of coolers in their stores impacts inventory moving quicker.  Martin also started realizing the weather and other factors impacting Coke bottle movements.  Martin is now a true Business Intelligence associate!.  This is why HR should pay attention to these trends.  We will bring a lot more data on this through our Collaborative Robots feature sets.

Our text mining models are being trained to monitor qualitative insights around the various diversity programs.  I was quite impressed by what Nike is doing.  Here is a summary of their Diversity initiatives.  This list is useful as it gives the breadth of Diversity goals they have set. 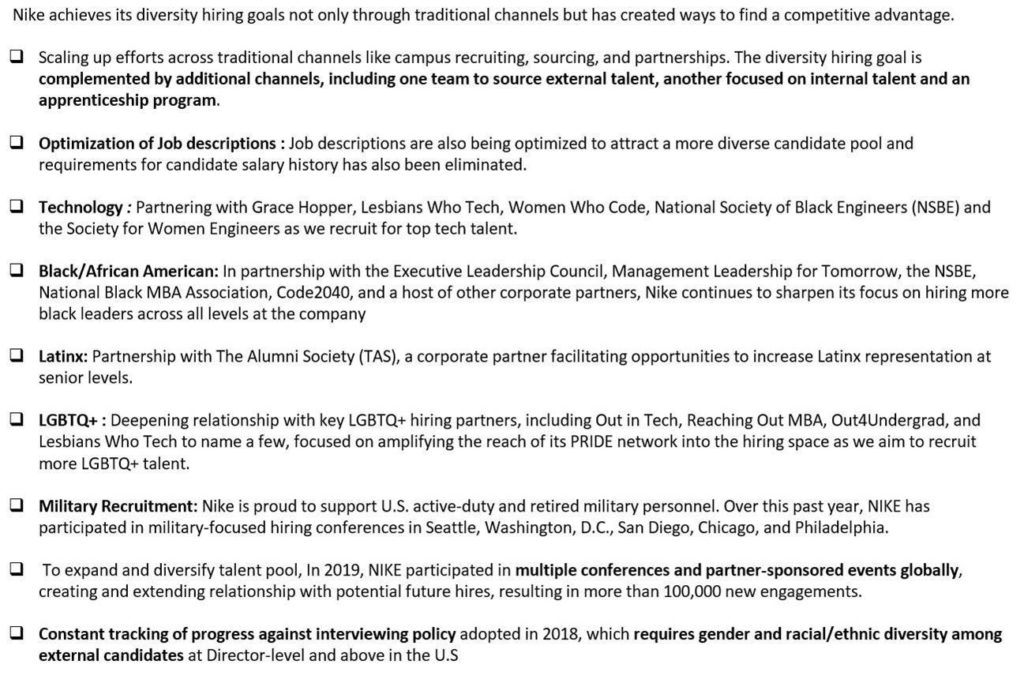