We have started with a question from a VP of HR. “Should we consistently and aggressively push our employees to keep learning new skills and be trained in new digital products?- Does that not create a stressful environment.” This question is a bit surprising on the surface but has a very deep meaning. All of us want to learn new things. It is a given in the knowledge economy. But at the same time, we also like a routine with familiar tools and platforms and disrupting that cannot be handled easily by all resources. Back in the 90s, when we had to switch from Word perfect to MS word, many people reported “learning and adaptability” issues. I was a supervisor at a computer lab, and this was one of the top complaints. To answer the question, we looked at some research around what constitutes true long term happiness (may mean short term stress). We stumbled upon the fascinating research done by Mihaly Csikszentmihalyi. – A Hungarian American psychologist. Csikszentmihalyi became a happiness researcher because of the adversity he faced growing up. He was a prisoner during World War II, and he witnessed the pain and suffering of the people around him during this time. As a result, he developed a curiosity about happiness and contentment and developed a detailed thesis around happiness. The summary of his work is as follows:

Although we crave time for passive leisure, people engaged in watching television reported low levels of contentment. Csikszentmihalyi’s systematic finding is that the activities that yield the highest for satisfaction with life require the successful performance of challenging tasks. These moments are encountered as frequently in work as outside it, and they constitute the state of mind which Csikszentmihalyi describes as flow.

An uptick in companies expansion and center set up plans

Across the Globe, We have several great initiatives from a center set up and expansion plans. Here is a quick summary of companies tapping global locations in the last two weeks

But of all this news. One company caught my attention. Brazil-based FitBank Pagamentos Eletronicos SA, a Fintech firm backed by JPMorgan Chase, one of the world’s largest banks in terms of assets and scope of operations, is planning to establish an additional business office in the US during the first half of next year.  The payment-services company claims over 100 clients in Brazil. It’s also preparing to launch operations in Colombia, Mexico, Peru, in 2021, according to Otavio Farah, CEO at FitBank.  I had written in my last email, how things are changing in the Latin American ecosystem. With respect to the knowledge economy, they are progressing well.  Many universities are researching AI, IoT, and all things digital.  Now products are emerging from places like Brazil that can compete globally.  They will also compete for American and Global talent as a result

Technology Skills of the Future

One of the dissertation thesis we reviewed this week by Nick Manuel (A Thesis Presented To The University of Guelph) showed an interesting concept of job distancing. This thesis found that STEM graduates are not as well matched. STEM graduates are often employed in occupations that use highly dissimilar skills from those traditionally associated with their field. This raises questions surrounding the benefits of public policies directed at increasing the number of STEM majors graduating from post-secondary institutions. The research also found that individuals who are mismatched receive lower earnings than their well-matched counterparts in occupations that use similar skills. This raises important questions surrounding the importance of post-secondary programs in matching graduates to highly skilled jobs vs. matching graduates to similarly skilled jobs.

This type of mismatch creates a longer-term problem for enterprises. The disparity is even higher among women stem graduates. The rate of innovation in the STEM field is also higher, so it isn’t easy to get back into a STEM job, if not pursued from the beginning of graduation.  Many STEM graduates have reported that the expectations in technical jobs are something they are unsure of handling effectively.  This is why it is extremely important to create entry-level jobs in tech.

We are mapping all the key roles under software and technology.  We expect that HR leaders will standup chapters for each of these functions and build boilerplate models to showcase entry levels.  We have given a sample here, but this has to be customized for each enterprise.  Your view will also include corporate functions which are intentionally not covered here 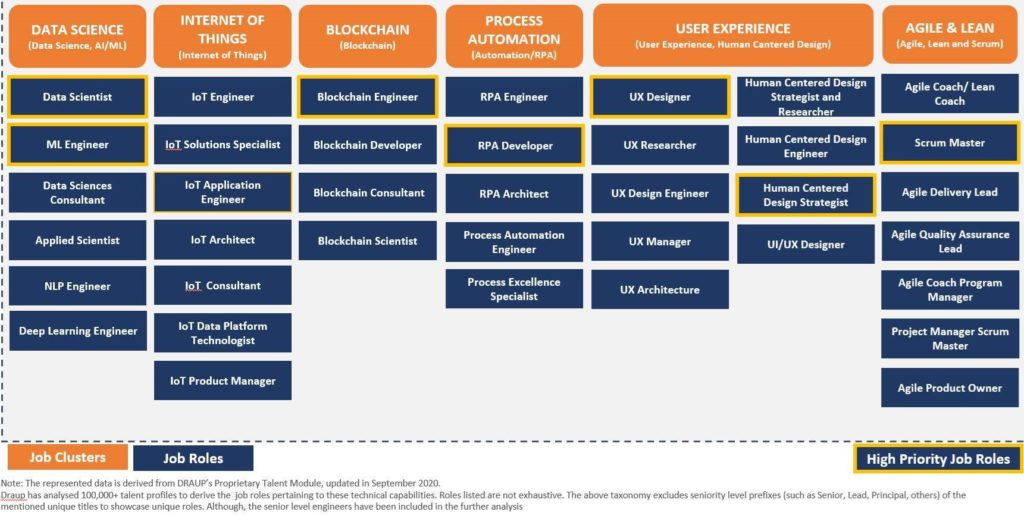