In one of my interactions with a CHRO, the discussions centered around skills for the leaders.  While discussing the several skills that HR leaders should develop, the question then centered around the most important skill that a leader should possess. While the usual candidates such as accountability, integrity, empathy, and other related skills, we were not satisfied with this. We researched finding that one quality that limits the potential of a leader. (so rather than listing out the essential skills., we tried to see what limits potential). Because human potential is infinite. We went back to several behavior models and to understand the most important quality that limits leadership potential. The work done by Sandford Professor Robert Sapolsky is fascinating in these areas. Professor Sapolsky is a biologist who warns that Categorical Thinking may lead to leadership failure. Categorical thinking is one that, based on the data one extracts from the environment, establishes categories in which practically everything that surrounds us fits. In many ways, humans are machines that process large amounts of data and categorizes.  This limits the human potential in an enterprise in a very big way.  The big side effect of Categorical Thinking is compression. Not being able to see the full learning potential of an enterprise is a very big negative side effect of Categorical thinking. The experiment that Professor Sapolsky conducted that in a visual spectrum of colors – different languages arbitrarily split up the visual spectrum differently. (for example where the visual spectrum changes from blue to green). This is fascinating research.

Let us look at what happened to Blockbuster. Once a dominating chain and where the family visited almost like a ritual every week, it does not exist anymore. Blockbuster was a victim of categorical thinking. Blockbuster never realized they were in the Entertainment industry and could not think beyond one form – DVDs. Human Resource Leaders should set very lofty goals for Reskilling. Our research shows that only 20% of the Enterprises have done something meaningful in this area.  Categorical thinking limits the learning potential of employees. Our research shows, not having enough entry-level roles could be the reason why we leaders are forced to resort to categorical thinking.  Let us say you are training a business analyst in Python.Post-training completion, we still have to give them six months to be able to decide the effectiveness of training. It may be beneficial to create a variety of indices to administer this. Of course, when you index something, you have to be careful. The London A level grade confusion that took place two weeks back is a great example of what not to do in Indexing

With summer exams scrapped, youngsters for A-level were graded using scores predicted by their teachers – which were then sent to exam boards to be standardized in a bid to ensure results would be in sync with those from last year.  This standardization resulted in the biggest Students vs. Algorithms protests.  The biggest challenge, as described by the Royal Society of Statistical Institute, was that the indices that went into the algorithm were not thought through.  If a school is historically performing low, the algorithm believed that a student from that school should be downgraded.  As we migrate towards an algorithmic world, this is very critical to understand.  But not all algorithms or indices are bad.  That is what was prove in the Africa COVID Vulnerability Index.  The index assesses seven kinds of vulnerability for 751 regions in 48 countries. The overall index (CCVI) is made up of seven themes: age, epidemiological factors; fragility; strength of health systems; population density; socioeconomic factors, and access to transportation and housing.  Today, this index is used for coordinated action.  This Indexing is very useful from a utility standpoint.  At Draup, we focus quite a bit on developing these indices.  (Reskilling Propensity Index, Opportunity to hire index, and several other location indices are useful in this journey).  It may be helpful to design and develop several indices for your internal views as well.

One of the most impactful studies we are working on is around the functional evolution of the job roles.  What we expected out of a job 2 years back is dramatically changing within each domain.  The Business Analyst role has rapidly evolved from tick-the-box & sourcing specific requirements to assisting in aligning & driving organizational strategy, with an opportunity to deliver real business value.  In the data economy, this is natural to expect.  While many companies claim to understand this, when we quiz them on what actions being taken around this reality, many draw a blank.  Many assets such as Job Descriptions, what we expect at various levels in performance management, and who we hire for these roles, all require an overhaul.  Enterprise world is moving towards a world where the cost centers are becoming profit centers.  Some of you may know this, but the AWS cloud service was started for internal use.  Once they realized how powerful this is, they started commercializing by selling to other companies.  Like this, if you, as Human Resources, have figured out how to hire niche talent, you may offer this as service to other companies as well in the future.  This is becoming a very interesting possibility as everything is in an agile and modular way.  (assuming you have technical systems in place).  While there are lower complexity tasks, there are truly no lower complexity roles anymore.  Understanding this will help you focus on all your Organization Design efforts quickly.

Several firms have realized that leadership training is as critical as training technical resources in the Digital transformation journey.  We have collected a lot of data across enterprises.

Here is a sample from Goldman Sachs 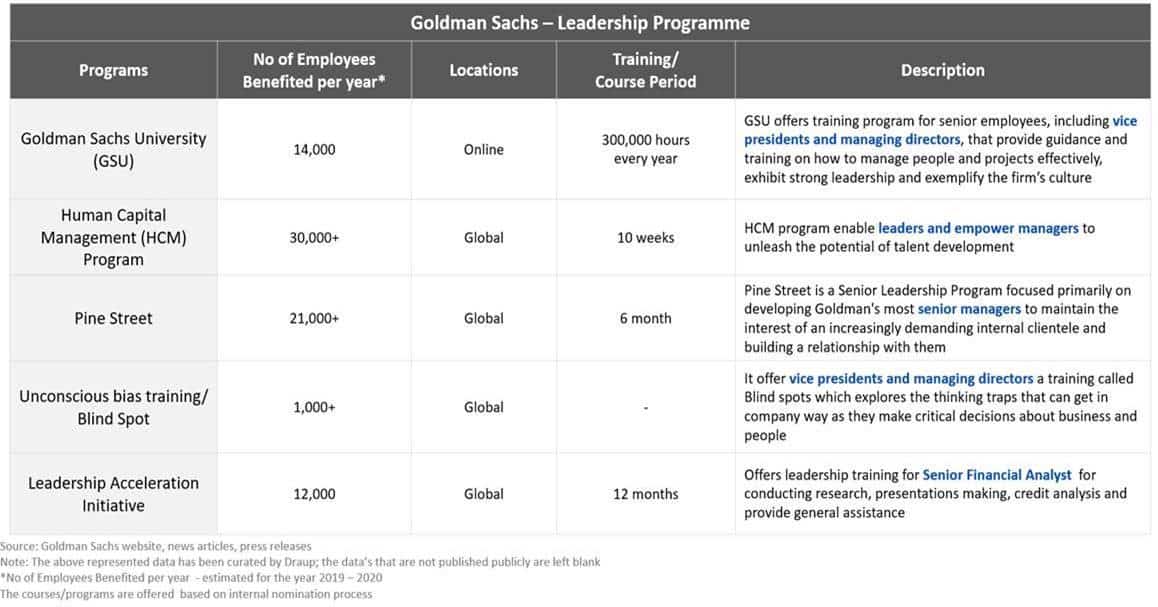