In one of my interactions with an EVP of HR, the discussions centered around building an agile learning organization. Organizations have made enormous training assets available to their employees. Yet many organizations are reporting learning material consumption only around 20%. Learning and Project needs are in two different paths. Our efforts on mapping Digital Intentions to skills is a significant step forward to bridge this gap. We took this discussion a bit seriously and looked at the behavioral aspects. Employees always say they want to learn, but when offered an unbelievable array of courses, the consumption is not high.

In order to understand this, we looked into the works of Daniel Kahneman.  Daniel Kahneman is an Israeli psychologist and economist notable for his work on the psychology of judgment and decision-making, as well as behavioral economics, for which he was awarded the 2002 Nobel Memorial Prize in Economic Sciences. Kahneman had written about an example from a study that was done 20 years ago when there was a lot of terrorism in Europe. Americans were frightened of traveling to Europe. Travel insurance was being sold at the airport. A group of people in an experiment were asked to appraise two policies of travel insurance. One offered a settlement of $100,000 for death by any incident; the other offered $100,000 for death by terrorists. People put a much higher price on the second policy. What were the people doing? They were more afraid of dying in a terrorist incident than they were fearful of dying. But dying is dying, no matter how it happens.  This is a very interesting behavior documented and very much applies to understand learner psychology.

Understanding the behavioral aspects of reskilling is extremely crucial.  As you could see in the example above, when people understand that a certain action (learning) will solve their immediate concerns (projects), then the consumption of course material is high.  As a result, we are taking an important step.  We are mapping all Digital Intentions to Skills, and we will now be mapping the Educational Courses relevant to those Digital Intentions.  Let us say, one of your initiatives is Customer Intimacy – we can map the tools related to that a Python, SAS, and Tableau and also give the associated courses in Plural Sight, Coursera, Udemy and so on.  Now how would we make this available to employees?  We have some work to do but can discuss this on a case by case basis

When it comes to learning, we cannot confine learning to a set of resources.  Leaders have to set very high standards.  Let us look at the story of a Starbucks Engineer.  Let us call the Engineer Marvin. (Imaginary name).  For a long time, Marvin had one interesting job responsibility.  Marvin would visit all the Starbucks stores and upload all the recipes using a thumb drive.  An average Starbucks has about 15 equipment, and this means uploading the recipes post the store closure into all the devices and testing.  Marvin did not enjoy this aspect of the job but understood the importance of it.  Marvin was very diligent, and Starbucks leveraged multiple engineers to do this seamlessly.  In May 2016, Starbucks hired Jeff Wile from Walt Disney.  Jeff is an avid follower of IoT solutions.  Jeff has avidly tracked all the trends on IoT as part of his daily digital habits.  As a result, Jeff suggested something revolutionary.  Jeff proposed all the equipment be IoT enabled (simply stated connect all devices to the internet).  Starbucks developed a plan to connect the company’s various pieces of equipment to send new coffee recipes directly to machines, which it has previously done by manually delivering the recipes to stores via thumb drive multiple times a year. Now the recipes can be delivered securely from the cloud to at the click of a button.

What just happened here?  Leaders need not be developing code, but they need to be aware in their own way of the various trends.  This skill, called “Digital Ecosystem Understanding,” is the most important skill that any leader can acquire.  In many ways, leaders have to collect stories like this and understand the basics of technology.  We have several such examples.  When McDonald’s CMO Silvia Dias Lagnado took over the Customer Insights project, she spent three weeks understanding the basics and applications of tools like Python and other Customer data insights technologies).  We will work very hard to get these stories to you regularly.

On the global locations front.  We see interesting trends emerge from South East Asia.  Japan has amplified its investments in South East Asia to revive Supply Chain, Information technology, and other related skills. Another interesting trend happening in Singapore is joint innovation centers (why innovate alone – in certain areas, it makes absolute sense to partner and split costs).  For a long time, SWITZERLAND’S leading global food technology provider, Bühler, wanted to improve and innovate in the areas of fragrance.  Rather than building this alone, they came up with an idea.  Buhler partnered with a world leader in flavors and fragrances, Givaudan are to develop an innovation center in Singapore, which will be dedicated to plant-based food with a focus on Asian markets. The new facility in Givaudan Woodlands is planned to open later this year. The innovation center will be jointly run by both companies, bringing together a pilot plant featuring a kitchen and flavor laboratory by Givaudan and Bühler’s extrusion and processing equipment. The upcoming facility will be supported by experts from both Swiss companies. Singapore was chosen as the site of the new innovation center by the two Swiss companies as it is a diverse country at the heart of South-east Asia with strong ambitions for the future of food.

Stories like this are just amazing to read and understand

We are quite upbeat about South East Asia the role it will play in the next ten years.  Here is a quick snapshot 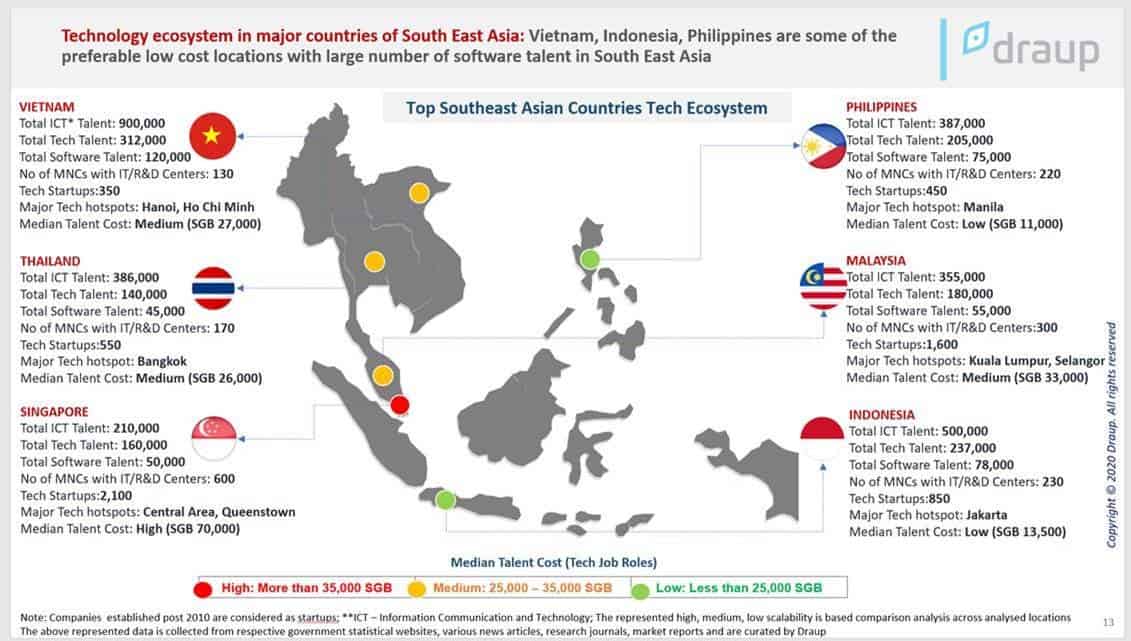 Read more newsletters
View All
Older
24 Aug 2020
Learning Incentives: Know the failure points
Newer
14 Sep 2020
What should be the optimal sampling of resumes when we decide we have seen enough candidates and start making an offer?