Case Study 1:  Based in Tokyo, Takata corporation started as a manufacturer of seat belts, child seats, and seat covers for Automobiles.  Takata ruled this space.   As its mission was passenger safety, its natural progression was to expand to Airbags.  In the late 1990s, Takata started sourcing its airbag inflators from a third party.  Unfortunately, an untraceable flaw led to numerous fatalities.  Having no internal expertise on a critical component led to the decline of Takata.  Takata did not institutionalize the ability to experiment, test, and scale internally.

Case Study 2:  Even when Sundar Pichai was still an Engineer at Google, he was convinced that Google should have its Browser.  Eric Schmidt, the then-CEO of Google, was absolutely against it.  Sundar Pichai rallied a few engineers to build the Chrome browser and demonstrated its power to Eric Schmidt and the rest, as they say, is history.

Risk-taking culture is essential for Location evaluation parameters.  Here are some factors attributed to Silicon Valley and why it is super successful.  (This was summarized in a dissertation thesis at the Eastern Institute of Technology – New Zealand)

Several critical elements of what can be considered to be the Silicon Valley model include:

(In other words, availability of talented recruiters)

This framework provides a different set of parameters for location analysis, and the recency of the studies is also exciting

Here are some interesting labor market trends this week:

The cognitive city is built on three pillars:

Many Global HR leaders in our network communicate a few essential things that complicate hiring in this new age:

Several cities are emerging/developing in the global talent scene due to new investments or MNC companies prioritizing expansion.  Here is an initial list compiled by Draup.  It will be refined further into a report we plan to release by the end of the year. 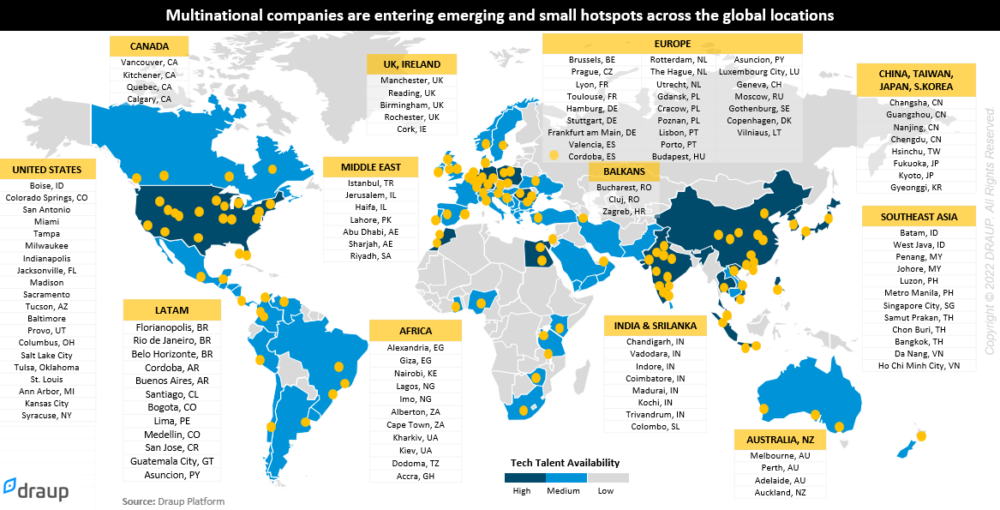