Innovation is in the minds of all companies.  The cost to innovate and the cost of the skills required for Innovation are keenly discussed across the global boardrooms.  The cost of Innovation is very tricky.  The discovery of pharmaceutical drugs obeys a rule called Eroom’s law1.  The number of drugs approved for every billion dollars worth of research and development halves every nine years.  A Tufts University study suggests that the cost of developing a new drug rose at least 13 times between 1975 and 2009.  Even though storage and computing costs are trending down, labor is becoming expensive in technology.  We also realize the labor required for AI and Automation is significantly higher than what we originally planned2.  A good blog article was written by the firm Andreessen Horowtiz around this.  All industries seem to converge around the increasing cost of labor.  In fact, the term Eroom is a reverse of Moore’s law which states that the number of transistors on a chip will double every two years. 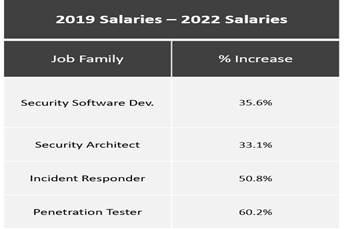 We ran a study in Canada comparing the current base pay trends3.  A job family such as Penetration Testing has gone as high as 60% in the last three years.  Some of the lower-cost options like Ukraine in the areas of Cybersecurity are disrupted, thereby creating a higher possibility of Cyber Security skills getting inflated at a faster pace.  From a skill standpoint, Ukraine played a significant role, and the skills ecosystem will feel this disruption in Backend Engineering and Cybersecurity stack for a while.  Companies also may face higher security threats as a result of this.

To truly get ahead, we have to build models.  From a location standpoint, there are some postulates we can make.  The disruption of Ukraine will bring new locations into the planning

(we will discuss this in detail in a subsequent email as the impact of Ukraine on the global skills ecosystem, but this needs to be understood at an industry level and company level)

Another reason the cost of Innovation is higher is the emergence of multiple use cases and the mad rush of Engineers into the space.  Many Engineers want to be in the Cryptocurrency space, and we are seeing the movement of Engineers into the Web3.0 space.  We see a similar trend even in Digital Marketing.  Within Digital Marketing, the use of Avatars within digital marketing is picking up, and many Digital Marketers want to understand and develop skills around this space (what is known as Vtubing).  To better understand this, we are developing a concept called the Skills Pipe model

A skillspipe model shows precisely where the talent pool shrinks, and you can focus on developing that particular skill.  An example stack of DevOps is given.  Across geographies, as you progressively load the DevOps stack, across geographies, you can see where the actual constraints are.  In DevOps, the true pipeline constrictor is Container-based apps and Microservices.  Now, if I am a workforce planner, I would give this feedback to L&D to put more emphasis on this for incoming DevOps.

In addition to L&D, we have to work on several reskilling plans within the existing team.  Maybe we need to launch workshops for existing DevOps.  If this is not done, when a Recruiter interviews a person with the Container apps skills, they will be forced to pay whatever that resource demands at the given time.  This reason is why tech labor inflates.  Such pipes can be built for all families and may be a helpful exercise.