We received positive feedback on our concept of Recruitment and Workforce Planning as Logistics Machine that we introduce.  When you take a logistics approach and look at the talent and hiring optimality as the primary objective function, many components get easier.

Consider the possibility of the World where age is less of a factor in hiring – where a seventy-year-old is a new hire?  This practice may not be unusual in a few years as we decompose the jobs into skills, and the ability to learn such skills becomes more manageable.  History has repeatedly shown that our collective biased views never materialize how we think about talent or locations.  The German Sociologist Karl Mannheim provided a different definition for a generation.  He defined generations as groups of people united by time and space who behave in unique ways with the collective meaning of certain experiences.  If one notices, there is no mention of age in this definition.

Let us look at Europe as an example.  From 2015 to 2017, the World started subscribing to the theory that Europe is a continent of yesterday.  Several theories were speculated how innovation has slowed down in Europe.  But Matt Miller, a Silicon Valley Venture Capitalist, brought a different view.  Matt asked a simple question applying the Logistic principle.  “The continent is home for three of the World’s top five computer science programs – Oxford, Cambridge, and ETH in Zurich” How can such a continent slow down in innovation?.  What Matt concluded was there was no one to underwrite the vision of European Entrepreneurs.  Just five years ago, Europe had fewer than ten unicorns.  Today Europe has close to 55 plus unicorns and growing fast.  This impact is the power of logistical thinking.

Here are some grounding thoughts in the Logistics way of thinking

Top innovative companies have this mindset built in their operations.  We have to look at our location and talent assets as a whole.  For example, here is a logistical command center view of how Google uses its location footprint.  Google products have R&D components leveraging talent across various locations in the globe.  Such magic requires careful thinking and execution and an unbiased thinking. 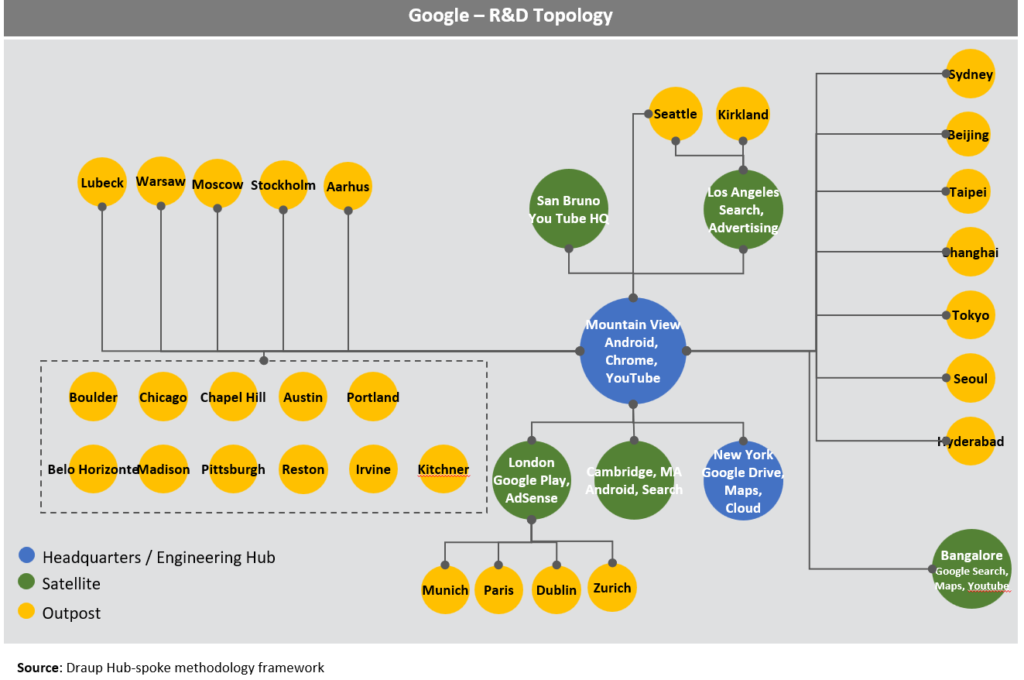 Another view that will be useful for Recruiters is understanding where they have successfully hired specific skills.  A skill level view of the source companies where you had success can be customized and maintained.

This type of view gives you the ability to expand the companies list by adding additional types of companies.

At Draup, many capabilities are being introduced in the Recruitment section to facilitate such thinking.  Please check it out.