Building a Foundation for Innovation in Talent Management with Data Analytics

Peter Drucker, one of the influential thinkers on management, once said that “whenever you see a successful business, someone once made a courageous decision.” The same can be extended when you see successful, high-performing talent in your enterprise; always remember passionate recruiters are behind it.  Similarly, when a location in your footprint emerges as a high utility location, you can be sure some unsung efforts of workforce planners are behind it.

As I have highlighted in several emails, we live in an era of mixed signals from the labor market in the last few weeks.  At the same time when you hear about layoffs, you are also hearing about Cisco committing to over 1 billion dollars in part to raise employee pay to stem a rise in departures.  Cisco is making this commitment despite the company’s revenue flatlining in the quarter that ended in July.  This move may be seen as an unusual move, but some ground labor realities are forcing them to take this decision

Unlike previous slowdowns, companies still sit on a significant pile of cash.  (S&P500 companies hold a record 2.7 Trillion dollars, and cash held by US companies is around 5.8 trillion dollars as per August estimates, according to Mitchell Petersen, a finance professor at Northwestern’s Kellogg School of Management.)  The only way this can be preserved and grown is through innovation, and talent is at the center of it.

A few weeks back, I visited a large Engineering firm in Italy and saw posters in the cafeteria illustrating concepts from Statistics and Mathematics.  (example- what is central limit theorem).  One subtle way to encourage all workforce to get back to Mathematics.  Innovation in the digital age is very tricky.  While the business focuses on the use cases and how to win, HR leaders must focus on foundations.

Matt Ridley’s book on How Innovation works give an interesting case study.  The author highlights the example of the arrival of sliced bread (best innovation ever happened as per me 😊).  Despite the electrical machines revolution that started in the 1870s, the Sliced bread machine was not invented till 1928.  And where did this happen?  In the small town of Chillicothe in the middle of Missouri.  Why this delay?  Many people attempted this problem, but Otto Frederick Rohwedder looked at it as a packaging problem rather than a slicing problem.  Because unless you auto- package the sliced bread, the bread will go stale.  Otto’s innovation not only sliced the bread but auto-packaged it as well.

What parallels this auto-packaging (the foundation) in today’s digital skills world?  Data Analytics is one of the critical centers of excellence that companies must focus on and build.  In this context, we are not talking about advanced data science skills.  We are referring to entry to mid-level data analytics and some data cleanup/annotation work.

We have developed a table to illustrate this.  Data Analytics needs are ubiquitous in the modern-day enterprise.  Data Analytics requirements exist across various functions.  We have defined the following hierarchy

Skills that exist within the clusters

Use cases within the Job Function (that the skill clusters support).  Please note there will be additional specialists working on these, but the data center of excellence provides the necessary foundation)

Such an approach develops a compelling roadmap for developing a cloud data COE that you may build.  It can be a hybrid set of locations you target to establish that will bring efficiency and productivity.  It will also provide specialists in the use cases to innovate and dial up their outputs.  Today, you have a wider choice of talent.  Many BPO-type talents across the globe can be reskilled into this talent.  We have great options in LATAM, APAC, NAMER, and EMEA regions, depending on what suits your strategy the best. 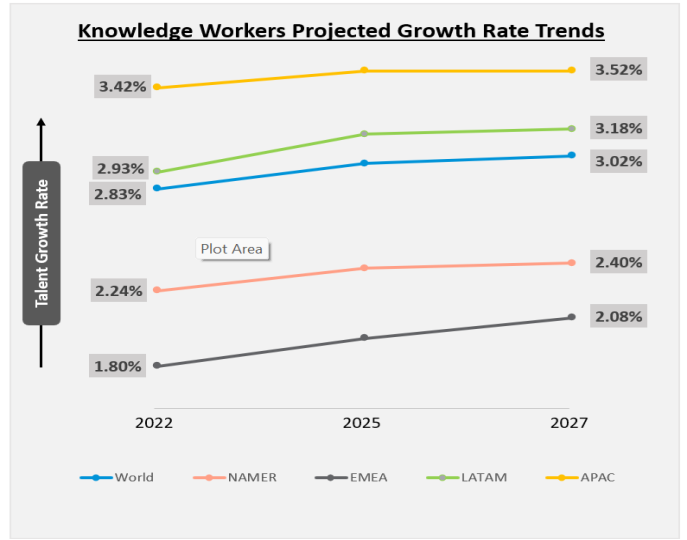 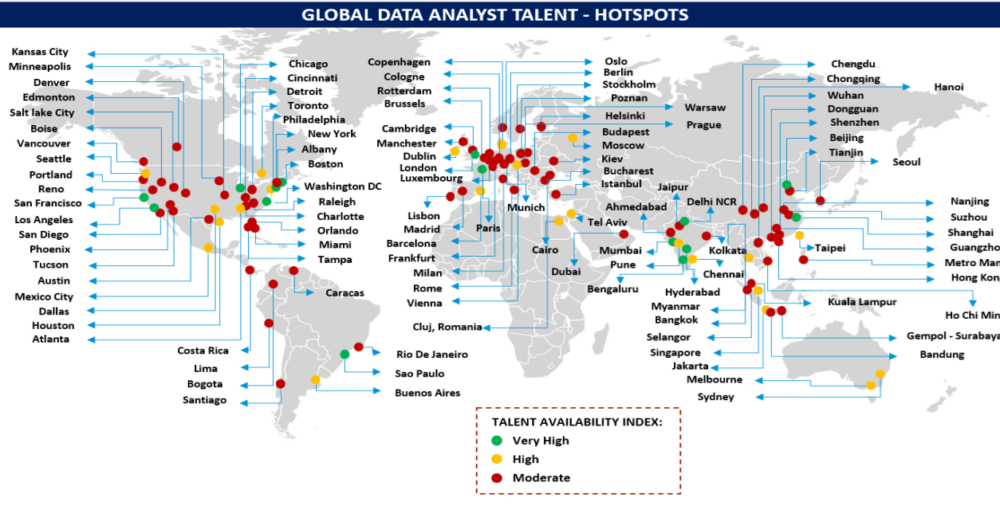 Here are a few other labor market developments