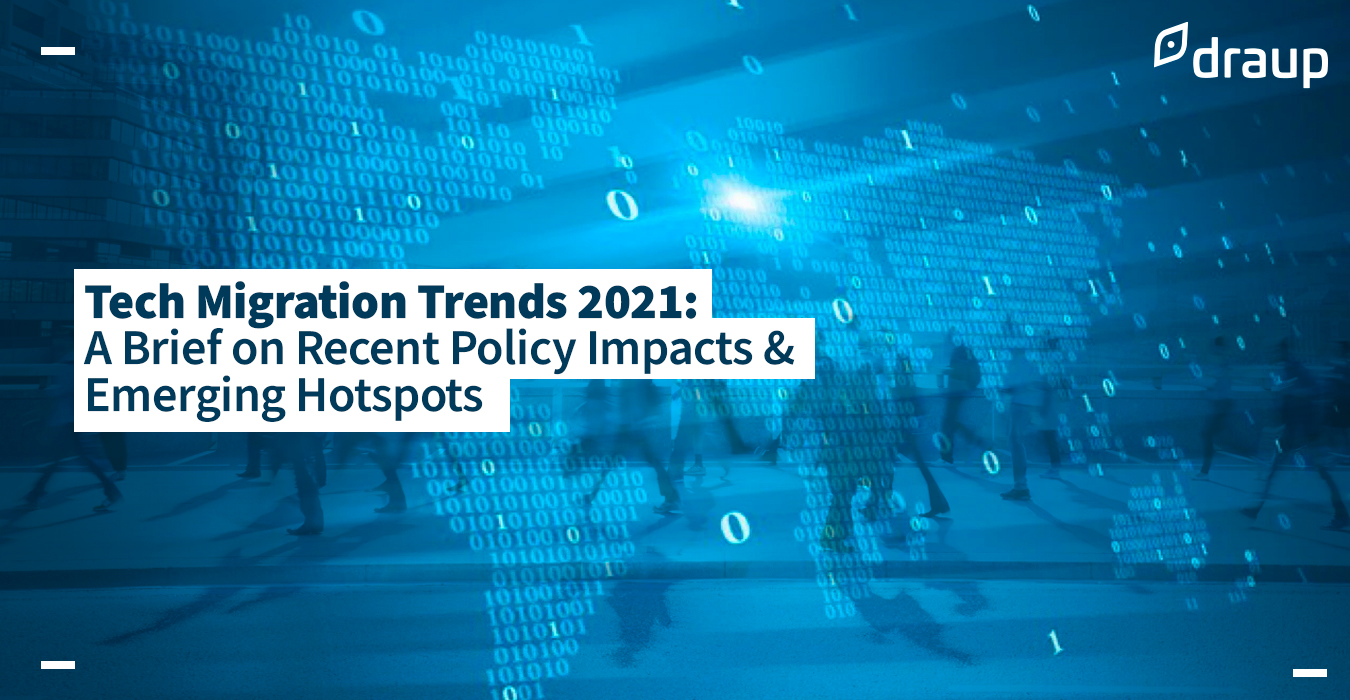 This report has been prepared with inputs from Amatya Agarwal, Kapil Suhane & Prakhar Neema

The global tech talent migration scene has been at an inflection point since early-2020, when the pandemic’s impact widened its geographic reach. Some countries have emerged as net talent winners, while others have been leaking valuable talent due to hastily implemented & ill-thought policies.

The ripples are yet to settle for us to extract viable trends; however, it’s the right time to study the shifting trends and extrapolate any potential findings to prepare for the ramifications of the global tech talent migration.

Tech Migration into the US: Just a Momentary Decline?

The US, being the largest tech economy and home to a majority of the tech giants, has been the most attractive location for global tech talent to immigrate to.

Talent hotspots such as San Francisco, New York, Boston, Seattle, and others have given rise to over 360 tech unicorns. This wouldn’t have been possible without an uninterrupted supply of talent from other developing economies.

In fact, the US was well on track to fill its 850,000+ and growing talent gap with immigrants.

A sudden rise in anti-immigration rhetoric and a sharp decline in the number of H1B visas approved have diminished the attractiveness of the US as a tech hotspot for global talent. 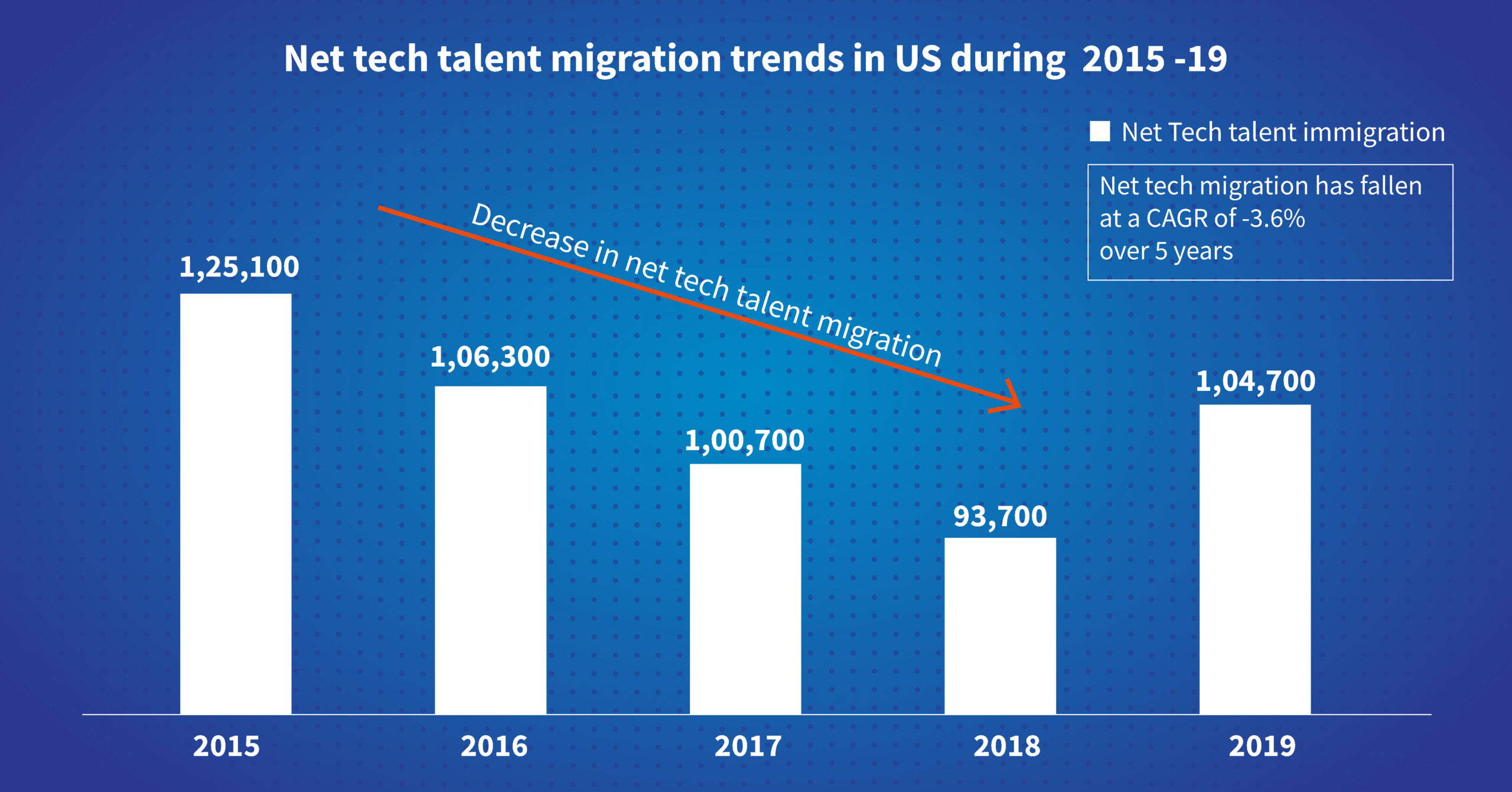 Combined with the emergence of other hotspots such as Canada, Australia & Japan that are doling out sops to attract prime talent, it seems that the global tech migration route has taken a different route.

Moreover, these nations also have a comparatively relaxed pathway to permanent residency, which makes them even more attractive.

With the talent bound for the US reducing, it was only a matter of time before other hotspots emerged to snag this highly-prized talent pool.

One country that massively benefitted from this is Canada. Today, Toronto, Montreal, and Vancouver are recognized as global tech hubs, thanks largely to their liberal program of offering permanent residencies. Over 40% of Canadian tech professionals are immigrants, and since 2016, Toronto has created more tech jobs than even the Bay Area.

Meanwhile, the establishment in Australia is trialing similar incentives by increasing the cap on professional visas 3X to 15,000. Along the lines of Canada, Australia has also launched a fast-track visa program to attract global tech talent. This program is significant as Australia was among the few economies that registered positive growth in 2020, and the demand for tech talent is expected to pick pace.

In Asia-Pacific, Japan is investing in its own startup ecosystem to attract talent from neighboring countries such a Vietnam & China. In fact, the island of Fukoaka is now home to over 1000 startups and continues to be a major attractor of global tech talent.

The demand slowdown for tech talent in the US did affect the Indian IT industry, one of the major exporters of global IT talent. However, the presence of a robust homegrown tech ecosystem meant that this talent did not go to waste. They have been readily absorbed into the growing tribe of product-based startups mushrooming all over India.

Over a span of months, while the pandemic was at its peak, a not-so-insignificant chunk of tech talent returned to India. It is expected that at least a small portion will contribute to India’s IT ecosystem that has spawned about 15 unicorns in the past year alone.

About half of US tech unicorns have at least one immigrant founder.

With the inauguration of the Biden administration, Lady Liberty’s torch once again beckons global tech talent to the US.

In a much-expected move, the US has increased the Diversity Visa lottery program from 55,000 to 80,000 per year.

The removal of the 7% country cap on the Equal Access to Green Cards for Legal Employment (EAGLE) Act 2021 is also expected to restart the inbound immigration of tech professionals from countries such as India and China.

Is it too little, too late?

Media reports extensively note a growing trickle of immigrant IT workers in the US applying for work visas in Canada. This trickle threatens to cascade into a flood as Canada & Australia continue to roll out housing, citizenship, healthcare & other sops to immigrants with as few hurdles as possible.

Without comprehensive immigration reforms in the US, the flow of tech talent will continue to be diverted to Canada, Australia, or the much-sought-after EU bandwagon.

On the other hand, India, China, Japan & other tech-talent rich countries are also redoubling efforts to persuade talent into staying home and work for the booming startup ecosystem.

However, it is not too late for the Biden administration to mitigate the effects with a reversal of controversial policies. There is still a huge tech diaspora in developing countries eager to get the coveted ‘US Engineer’ tag. It remains to be seen how the current dispensation will capitalize on these positive sentiments before public memory erodes & people move on.