While anecdotal evidence of a possible global slowdown is piling up, the Job Postings and other concrete datasets do not necessarily reflect that.  British Economist Bob Shwartz says that the bargaining power of employees may go down.  Another theory is the “too hot” market got “just right.” I have traveled for the last four weeks as leaders give more face-to-face meetings.  One of the senior leaders mentioned that it is around this time that organizations tend to listen less to employees’ creative ideas for innovation.  As a result, there is a risk of losing critical talent.  It is precisely around this time we need to promote innovation from the teams

Let us begin with a story.  Stem Cell Biologist Takanori Takebe had a career breakthrough in 2013 when his paper on creating a baby liver using stem cells was published in the journal Nature.  Takanori Takebe was only 26 years old and then a researcher at Yokohama City University in Japan.  Publication in Nature put Takebe in celebrity status.  Institutions around the world contacted Takebe.  Takebe gave what is known as “Chalk Talks” (Wildest ideas pitched with no slides but just through a discussion board and chalk).  Eventually, Takanori Takebe shifted to Cincinnati Pediatric Hospital.  One of the critical reasons Takebe mentioned was the solid mentoring and support offered by Cincinnati Pediatric hospital.  We cannot underestimate the importance of such skills around mentoring, servant leadership, and inclusive environment, and outcome visualization.

Focusing more on Job Architecture may yield more ROI around this time.  The reason is that there is much more clarity around several critical tech stack elements.  So if we have completed the architecture, say two years back, it may be worthwhile to relook at adjusting.  Let us look at a critical function like Data Engineering where you use languages such as Python and Scala

There are many layers in Data Engineering that we did not have good clarity on, but now we know a lot more than, say, two years ago

The above classification is an approximate layer, and I may be missing a few components as this is my initial attempt at classifying, and we will refine more.  Some tech companies are creating roles such as Analytics Engineers to move BI Analyst into the Data Engineering stack.  Moving the BI Analyst role to Data Engineer may sound very complex when looking at this as a Data Engineering Problem.  But when you look at, say, Data Ingestion within the Data Engineering (where more tools are evolving, and things are getting a bit easier (in relative terms), this transition becomes possible.

So the job architecture’s objective should enable us to understand these Vantage points of how we look at the jobs.  Such mapping brings new life to the Job Architecture.  Such

A different view across all the roles may help us identify Zones of Reskilling, Zones of Automation, etc.  Ideally, we would like this to be at a skill level (as there may be some skills within a job role that could be automated).

Such a framework can provide optimality in Recruitment.  In the framework we elaborated, the JDs can say Business Intelligence Analyst with Introductory Python skills may apply.  Such adjacent skill clusters can be passed to Recruiters, who will then do the magic

We worked with a team of Recruiters who have been struggling to hire SaaS Enterprise Account Managers talent.  We created a Role Blueprint that looked something like this.  This simple sheet helped the team significantly.  Now, if we can translate and establish an assembly line effect from Job Architecture – Job Descriptions – Recruiters Blueprint, and if we can do it at scale, then we can bring significant impact. 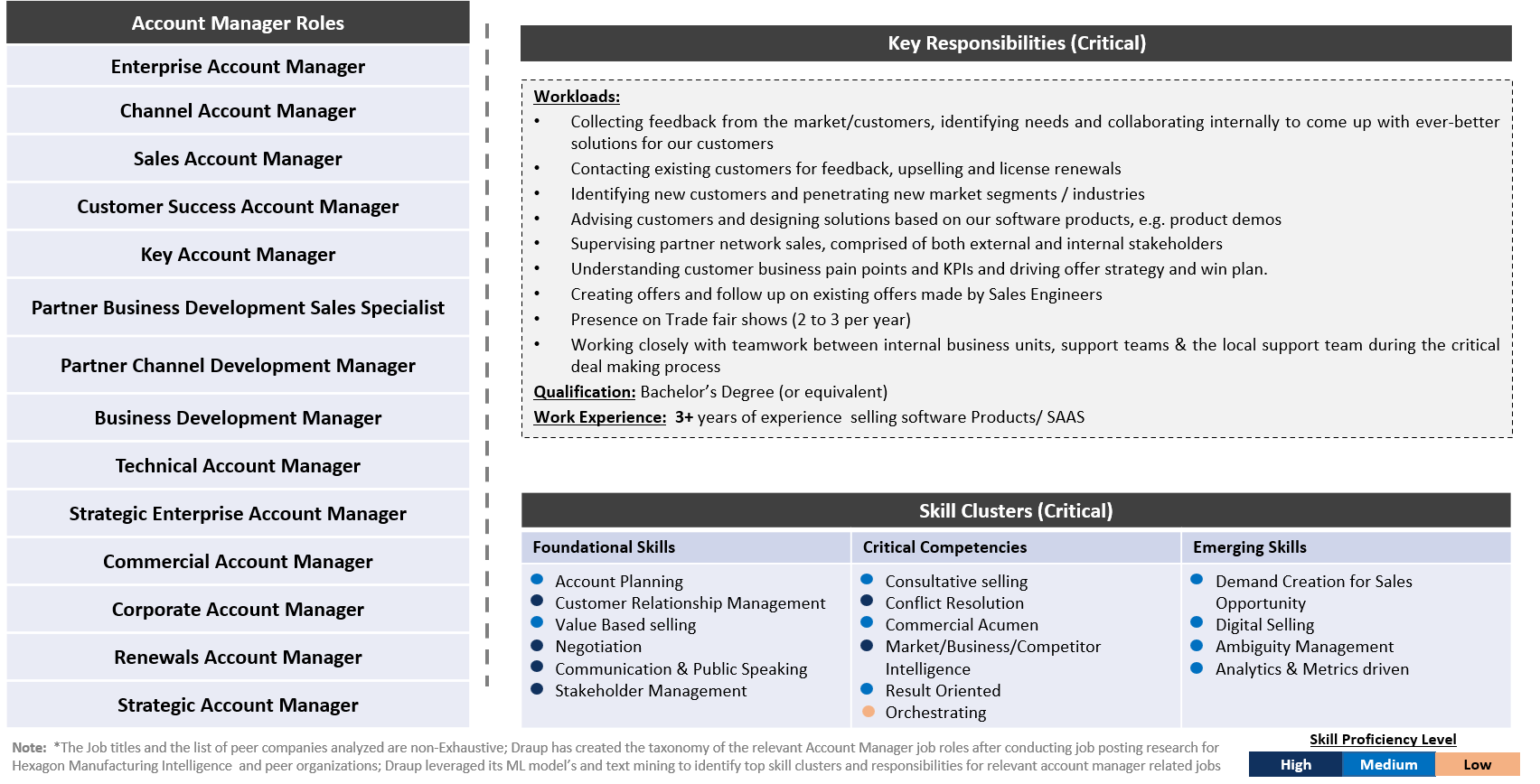