Post pandemic, Location intelligence research has got fascinating.  Such Research needs to be very strategic from a workforce planning standpoint, but at the same time, we have to execute and move very fast on critical decisions.  A data scientist named Youyang Gu emerged during the pandemic, building one of the best performing Covid19 projections.  In his own words, Youyang Gu states that Research is generally a slow process — decisions take months and sometimes years. COVID-19 has hastened this timeline. People who can adapt to fast iterations and release real-time analyses will inevitably have an advantage in producing the latest insights. Youyang Gu built a machine learning model hailed as the most accurate for Covid-19 projections through this fast iterative approach.  The exciting aspect about this was that Youyang Gu was an untrained data scientist who relied more on crowdsourcing the inputs for his algorithm and frequently updated the model.  Advancements in technology and dismantling barriers to communication have enabled access to, and the ability to build on, tons of information and knowledge that were previously inaccessible

At the same time, the dynamics of the globe today mean that companies need to be strategic.  China wrote an interesting white paper in early 2018 on maritime location possibilities.  This whitepaper shows the power of operating strategically.  The white paper predicted that Kirkenes, a small port in far northeastern Norway, close to the Finnish and Russian borders, will emerge as a critical hub in the next 20 years.   The paper suggested that due to Global Warming, the water in the Arctic would become favorable to move ships, and Kirkenes could emerge as an alternative to Suez Canal Route.  In fact, many countries are working on amplifying the investments in the port of Kirkenes.  Given that Kirkenes is a tourist hub already, who knows it could even be a Software hub as well in the next 20 years

It is important to understand variables such as Climate Change, Global Migration Trends, and Changing political aspects in predicting how a location should be considered.  In our location studies, we want to bring these three strategic variables.  (The impact of Strategic variables on location is well documented in a fascinating book by Geert Mak titled The Dream of Europe. In the Dream of Europe, Mak turns his keen eye to the controversial rollout of the Euro, the impact of terrorism, European optimism, the refugee’s movement, and other aspects.  Though the book is written from a sense of worry about Europe, Draup believes that many optimistic trends in Europe are happening.  This book is good for the framework used for Research)

For example, let us look at Romania – a city where we are upbeat about the long-term prospects of emerging as a critical talent hub.  One concern is the migration of tech talent outside Romania. This trend has been similar even in places like Bengaluru during the beginning days when people migrated faster to other countries.  But Bengaluru had a vast fresh talent pool to offset the same. 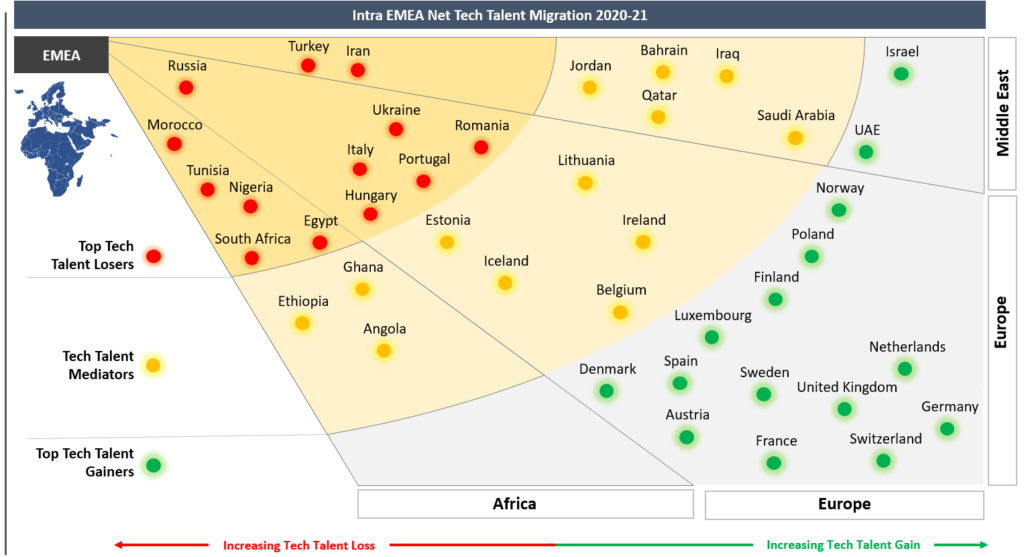 At this stage, we want to bring in the concept of operating with multiple hubs  (either within a country or across countries- as of now, Draup is calling it Ancillary hubs).  Here are the trends around this concept of Ancillary Hotspots.  All these trends are initial trends (much like the Youyang Wu model)

NORTH AMERICA: Due to increased remote working models, companies have had the opportunity to leverage untapped talent from remote locations and efficiently meet the hiring demands across the USA. Major Hotspots such as San Francisco, Washington DC, New York, and Seattle, which serve as the HQ of key tech organizations, are now tapping locations such as Philadelphia, Detroit, Houston, Atlanta, Orlando, Charlotte, San Diego, St. Louis, Miami, Cleveland, and Austin. A surge in Hiring has been observed in Portland, Cincinnati, and Nashville for Google, Amazon, Facebook, and Microsoft across various tech and non-tech roles.

LATIN AMERICA: For decades, much of Latin America was a morass of hyperinflation and political instability. But today, LATAM has emerged as a promising market with increasing competition and an aggressive economy. The profit growth in Latin America is expected to be much higher than in other emerging and developed countries. According to various studies, projections indicate that Peru’s earnings-per-share growth will be 256%, followed by Brazil (174%), Colombia (121%), Mexico (77%), and Chile (62%); much higher growth than India (41%), the United States (20%) and China (19%). Brazil and Mexico have the highest penetration of foreign investment and are the first preference for any organization near-shore operations; However, the increasing attrition rates in Mexico has led to companies exploring alternate options. Industrial Automation giants such as Siemens, Schneider, Honeywell, and Rockwell are investing in expanding their operations across Colombia (Bogota DC, Medellin), Chile (Santiago), and Peru (Lima).

EMEA: London, Munich, and Berlin have been the most central Hub of MNCs while investing in EMEA. But due to talent cost being relatively much higher than the USA itself, shortage of skilled fresh talent, and a highly competitive environment, companies are interested in exploring lower-cost locations. The WFH model of operation has fuelled this interest to tap talent in locations like Leeds, Manchester, Glasgow, Edinburgh in the UK, Stuttgart and Hamburg Area in Germany, and Frankfurt emerging as a Fintech and Cybersecurity hub in Germany. Poland is defined as one of the countries which have the most considerable digital potential in Europe. In May 2020, Microsoft announced a US$1 billion, 7-year digital transformation investment plan in Poland, and Google announced the launch of a new Google Cloud region in Warsaw, also its first in CEE, with an investment of up to US$2 billion. Romania (Bucharest, Cluj, Iasi), Italy (Dublin), Netherlands (Amsterdam and Rotterdam), Ireland (Cork and Belfast), Czech Republic (Prague) are growing ideal locations to scale large tech teams and for remote work opportunities. Siemens is to expand its smart infrastructure in the Middle East and develop the hydrogen energy industry in Saudi Arabia. Dassault to open a new high-tech office in Ireland.

APAC: India (Bangalore, Delhi, Pune) and China (Beijing, Shanghai, Shenzhen) are the biggest low-cost markets in APAC for offshoring and outsourcing operations in APAC, seeing immense growth and investments from tech, manufacturing, and automation companies all over the globe. However, in recent years, APAC’s cost-benefit has allowed industry giants to expand their market across emerging locations such as Indonesia (Jakarta), Philippines (Metro Manila), Singapore, Taiwan (Tapei), Malaysia, Thailand (Bangkok), Vietnam, Japan (Tokyo being of the leading economic cities in not only Japan but the world with about 613 companies establishing their headquarters in the city, followed by Osaka) and Hongkong. Google opened a new office in Shibuya, Tokyo, in 2019, for using big data, machine learning, and expanding its cloud services, doubling the size of Google employees in Japan. Google is also planning to scale its Taiwan R&D center, which will focus on AI, and with Melbourne, the company opened its second R&D office in Australia in 2018.

The critical message is to look through the existing location footprint through the lens of Strategic variables.  Create a Team of Recruiters and Talent Intelligence professionals to create both Strategic and Tactical viewpoints.  Let us look at Microsoft’s US strategy (Microsoft has a global location topology, but for simplicity, we have focused on the US topology).  A map of various locations in the US is shown.  From here, one could further double click on locations like Miami becoming a LATAM hub.  (Miami connected with Brazil,  Argentina, and Mexico operating as one Hub) 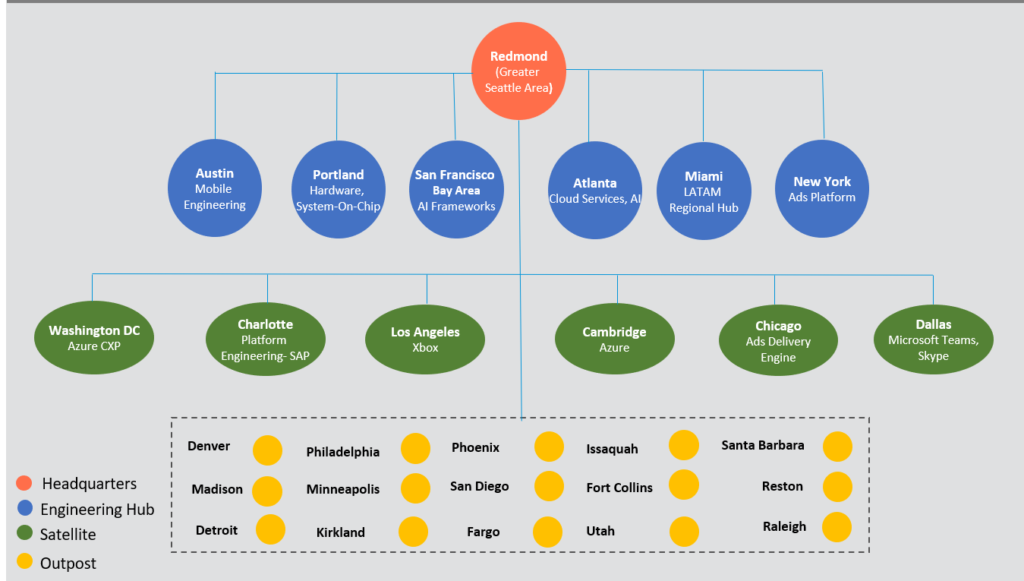