We are introducing a concept called Job Role Commoditization.  This is an essential concept for Recruiters and Workforce planners to understand in detail. As stated in the previous emails, the top talent is no longer only in the most prominent cities.  Today, a 20-year-old Mexico City native – Leonardo Lopez Perez, is one of the e-sports industry’s top gamers, widely considered to be the world’s best player of “Super Smash Bros. Ultimate,” a fighting game for the Nintendo Switch where players battle each other as famous gaming characters like Mario, Donkey Kong, and even Pac-Man. Two years ago, Perez won the most significant “Super Smash Bros. Ultimate” tournament ever held at the 2019 Evolution Championship Series in Las Vegas, taking home a prize of more than $21,000.  Today Perez assists several gaming development companies and has already earned more than a million US dollars freelancing!

The reason I share this story is, due to advancement in Cloud, Talent is spreading out.  Ten years ago, such stories existed only within the boundaries of big cities.  Also, cements my faith in the emergence of Latin American countries as a software powerhouse (may take some time but some early signs emerging).  Argentina, Brazil, and Mexico are trying hard, and there are 16 unicorns in Latin America.

When we looked at the job families that have migrated the most out of bigger cities (of the talent that is migrated), we get an interesting trend 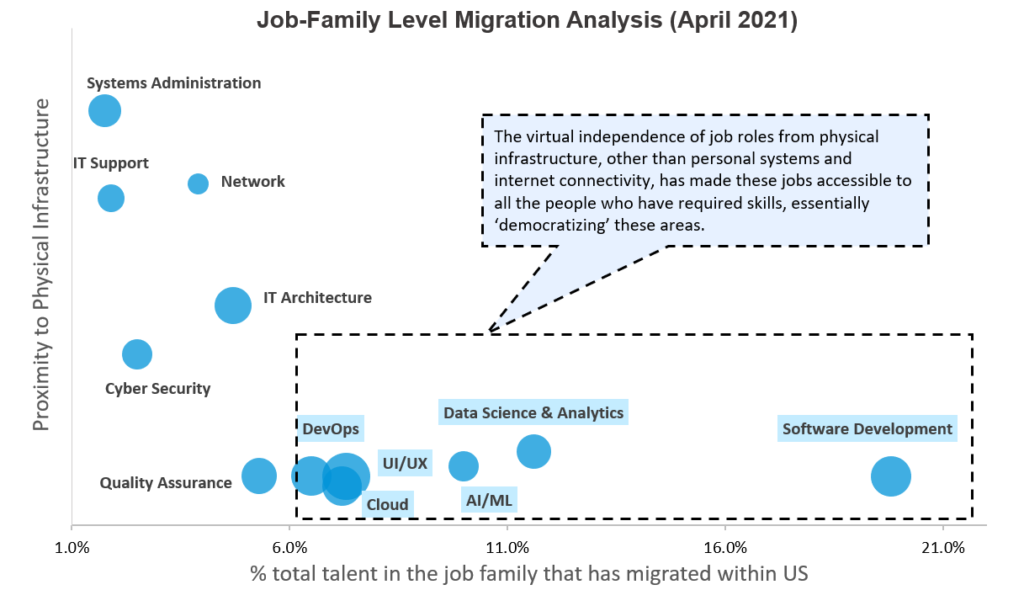 This phenomenon creates new boundary conditions for a Recruiter, and the concept of a “location” has permanently changed.

As migration happens in critical job families (even at a lower rate), commoditization starts.  This is an expected effect evident when you read the economic theories.  When people migrate, a new set of people around them get into these job families.  A team of specialized software engineers went to places like Georgia in the US and built a software team of about 20 people recruiting local university members over two years.  Commoditization is the opposite of the  Galápagos syndrome.

The term “Galápagos syndrome” was originally coined to refer to Japanese 3G mobile phones, which had developed a large number of specialized features that were widely adopted in the Japanese market, but were unsuccessful abroad. While the original usage of the term was to describe highly advanced phones that were incompatible outside of Japanese networks, as the mobile phone industry underwent drastic changes globally, the term was used to emphasize the associated anxiety about how the development of Japanese mobile phones and those in the worldwide economy went along different paths.

Perhaps, one strategy is to develop a strategy that is different for different types of locations.  Several cybersecurity skills, Application Development skills, and Cloud Support roles are widely available in smaller cities.  We expect this trend will continue.

At this juncture, the location analysis needs to be conducted whether you are planning to treat a location as a Hub, Satellite, Outpost, and COE.  Now to this mix, we have to add Remote and develop strategies around that.  For example, do you open a PE location in these hubs?  What are the brand implications in attracting local talent?  What happens if you start making revenue in these locations?  Very many questions, hopefully, we will cover in subsequent emails.