An MIT cognitive scientist Tobias Gerstenberg deployed a fascinating experiment.  Dr. Gerstenberg demonstrated a compelling mental model called Counterfactuals.  The study, conducted in 2017, is groundbreaking in the cognitive field.  The human mind makes very many micro-predictions when facing a situation/decision.  To prove this, Dr. Gerstenberg, decided to study the eye movements of people.  Eighteen videos were recorded, and the eye movements were tracked using infrared light.  The research found that people rapidly shifted their focus to imagine the possible trajectories of the call visually.  In other words, they applied Counterfactual reasoning to anticipate what might happen – so the eye is rapidly shifting between Reality and Imagined Reality.  The eye can predict what may happen – In this case, it acts as a forecasting tool!.

Understanding this can enable all of us to become better predictors.  For a Recruiter, this skill is critical to nurture and grow as they can predict whether a candidate will join them or not. It is not just in micro contexts.  Using such counterfactual thinking will benefit long-term planning as well.  The earliest such mental models date back to Dr. William Crookes’ dire food scarcity warning

At the end of the 19th century, William Crookes – physicist, chemist, and inventor of Crookes tube (an early vacuum tube), issued a dire warning.  The British Isles, he said, were at grave risk of running out of food.  His reasoning was simple, the population was growing, but the amount of land under cultivation could not keep pace.  Dr. Crookes delivered this at a dinner event, and many of his colleagues were very upset.  They called him an “Alarmist,”  But it is an alarm that triggered the development of Fertilizers to improve crop yields.  In some ways, this alarm kept the world fed (hunger is still prevalent, the recent Sri Lankan food crisis is an example.  But crop yields have improved significantly over the last century)

Two weeks ago, at a leadership meeting, I was asked, if I were to identify one new skill that Enterprises should develop, what would that be.  After researching, we produced a taxonomy of various skills across Digital, Tech, and Corporate Functions.  But one skill, we highlighted is becoming important

Role and Responsibilities of a Solutionist

The role and responsibilities of a Solutionist.  At a high level, a Solutionist is brutally honest about a problem but Optimistic about a solution

Microsoft is attempting to build this group of Digital Solutionists.  Such a group will aim to provide the following aspects

Suppose you have a Supply-Demand talent Gap problem.  There are two ways to frame this – An Existential Crisis or A Transformational Opportunity.

If we mental model as a crisis, you will do the following:

If we mental model this as an Opportunity, you will do the following:

If we take an Opportunity framework, we can develop models of learning like this.  Imagine have these assets readily available.  In the diagram below, we have mapped a few feeder roles to intermediate and end roles. 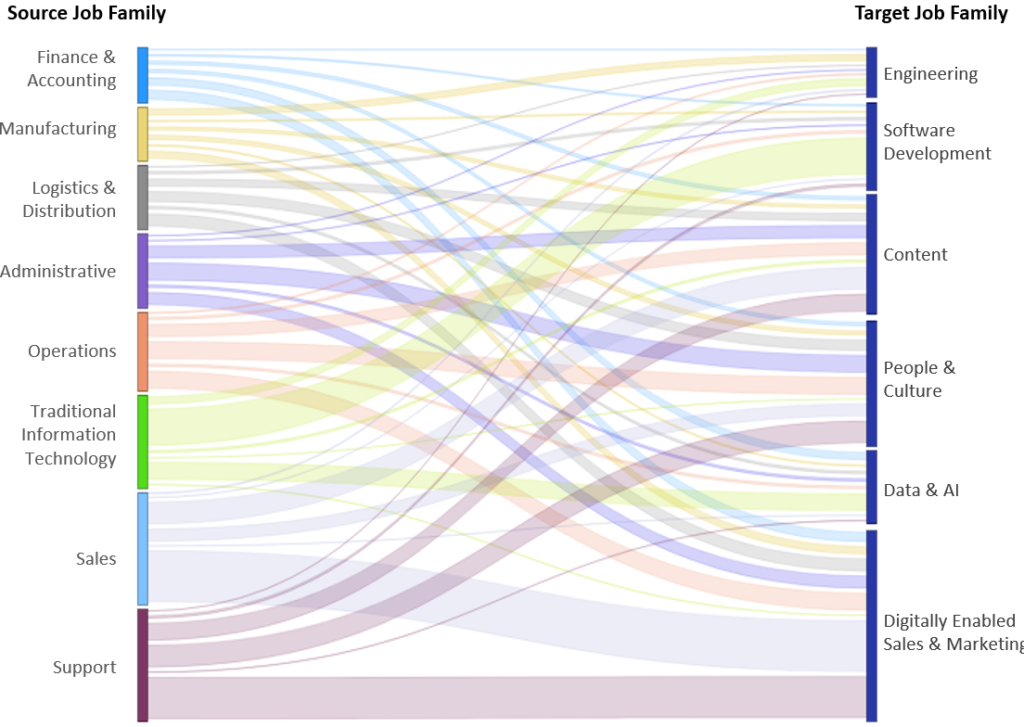